ALOR SETAR (Bernama): A total of 85 people from three districts in Kedah were evacuated to three temporary relief centres (PPS) after their houses were flooded following heavy rain on Monday (Nov 23).

"A total of 29 people from six families from Kubang Pasu are placed at PPS Sekolah Kebangsaan (SK) Malau. They are from four villages, namely, Kampung Lahar, Kampung Paya, Kampung Paya Tok Teh and Kampung Biak.

He said that heavy rain on Monday caused the water level in the low lying areas or near the river to rise between one to two metres and the victims had to be evacuated immediately using a five-tonne lorry belonging to APM.

"Currently the water is receding slowly. If it does not rain today then the water is expected to recede completely and the victims will be allowed to return home,” he said.- Bernama 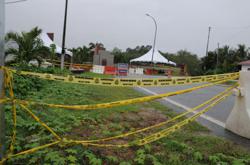