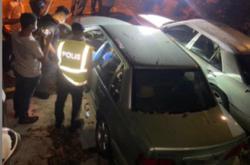 BUKIT MERTAJAM: It’s life in the slow lane these days for mechanics.

Their business has not seen any pick up as most of their customers are either working from home or facing a limited budget to keep up with their maintenance schedule.

Furthermore, motorists are not using their cars as much due to travel restrictions.

“My workshop has been quiet for the past few days, ” said mechanic Teh Wei Ping, 42.

“Some car parts are taking longer to break down due to owners hardly using their cars, ’’ he said, adding that business has dropped by about half compared to last year.

With more Malaysians working from home in the age of Covid-19 and cutting down on travel, he said that motorists were stretching the schedule to service their car.

“Those who come in for monthly service are now doing so every two or three months, ” he said.

For example, it is no longer the case of people getting an ordinary engine oil change every 5,000km.

However, Teh noted that the number of car owners who contacted him for battery-related problems increased during this period.

“There are multiple cars at some houses and not all of them were driven during the movement control order period, so the batteries had to be replaced or recharged.

“But the profit for this is very low. So, it is difficult for us to make ends meet, ” he said.

In Butterworth, tyre shop owner Yong Hee Chern, 33, found that some people were driving around with worn-out tyres as they cannot afford to replace them.

Although an ordinary set of car tyres can last from 40,000 to 50,000km, Yong said they should be replaced within three years regardless of the mileage.

“When tyre tread gets worn out, the tyres lose traction during braking and won’t grip the road well, especially when it rains.

“But because many people are not travelling long distances for holidays or festivals, they feel it is not necessary to get new tyres.”

Car tyres, he said, come with the date of manufacture and he could not hold the stock for too long or the tyres would lose value.

Yong said the profit from other services such as wheel balancing and alignment adjustments had also dropped.

“When the MCO was enforced in March, we were closed for two months.

“After reopening, we tried to clear existing stock and business slowly recovered, ” he said.

For now, his regular customers were mostly on a shoestring budget.