KUALA LUMPUR: The police detained 93 patrons of a karaoke centre at a mall along Jalan Ampang here when it was raided by CID officers from Wangsa Maju.

One of the karaoke rooms at the centre was even the size of a multipurpose hall, which was operating illegally after its business licence expired in July.

Priced at RM50,000 a night, the room comes complete with alcoholic beverages and a DJ.

"Among those arrested were 66 local customers consisting of 44 men and 22 women as well as 11 foreign men and 15 foreign women. They were busy partying when police raided the outlet.

"The business licence has also expired after the government prohibits any entertainment activity during the conditional MCO, ” he said when contacted on Sunday (Nov 22).

"The local customers detained were issued with compounds while the foreigners are being investigated under the Immigration Act," he added.

SAC Nik Ros Azhan also said the operators of certain outlets are coming up with ways to avoid detection.

This includes ensuring that patrons park their cars at the basement level and not near the outlet, or encouraging customers to use e-hailing services, he added. 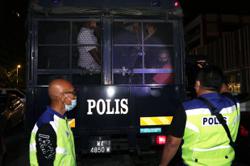