JOHOR BARU: Malaysians returning from Singapore under PCA (Periodic Commuting Arrangement) find themselves being deemed “high risk” by the MySejahtera app, despite being out of quarantine.

Malaysia-Singapore Workers task force president Dayalan Sreebalan said due to the “high risk” status, these Malaysians were unable to enter many places, including government departments and banks.

He said many of those who were tested for Covid-19 when they returned from the city-state under PCA received their results and were released from quarantine after two or three days.

“But in the MySejahtera app, their status is stated as ‘high risk’ for up to 14 days.

“Even if they are sick they can’t go to any government hospital or clinic but are forced to go to the ones handling Covid-19 patients, ” he said, adding that he had been getting many such complaints lately.

The Health Ministry, he said, should update the MySejahtera app once the person had been released from quarantine.

Dayalan added that thousands of Malaysians with Singapore permanent resident status were also losing out as they were forced to undergo up to 14 days’ quarantine in Malaysia upon their return as they were not eligible for PCA or travel under the Reciprocal Green Lane (RGL) arrangement.

“We have received more than 1,300 such complaints from PRs alone. I feel sad that nobody seems to be addressing their issues, ” he said.

Dayalan is appealing to Johor Ruler Sultan Ibrahim Ibni Almarhum Sultan Iskandar to help mediate the reopening of the border with Singapore.

He said this was to help thousands of locals whose livelihoods had been affected by the eight-month-long closure.

“We have a memorandum containing more than 20,000 signatures of Malaysians, mostly workers, who are appealing to the Johor Sultan to step in to help resolve the problem, ” he said, adding that they hoped to be able to meet an official from the palace soon to hand over the memorandum.

Presently, both countries are allowing workers and the business community to commute using the PCA and RGL.

The move came into force in August.

Dayalan has also given two memorandums to the state government with regard to the problems faced by the people since the border closure on March 18.

On a separate issue involving videos attacking Dayalan and his NGO for supposedly carrying out “financially-motivated work”, he said he was unperturbed by the allegations.

As an NGO, he said it collects money to run activities and not for personal gain.

“Each member pays RM10 for registration and RM100 for an annual membership fee.

“This money is channelled into our NGO account which is audited, ” he said, adding that they incur expenses running the NGO, including rental and staff salaries.

He said he did not have any sponsorship or backing from the government or the opposition.

“We run the organisation mainly to help people who are suffering because of the border closure, ” he said. 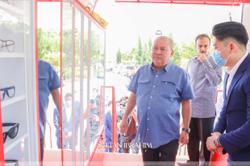