Apec 2020 concludes in KL in a high note

KUALA LUMPUR (BERNAMA): The Asia-Pacific Economic Cooperation (Apec) launched the Putrajaya Vision 2040, an aspiration for present and future economic growth in the next 20 years, on Friday (Nov 20).

The fresh vision replaces the Bogor Goals that were announced in 1994 when Apec leaders met in Bogor, Indonesia, and adopted for the long-term goal of free and open trade and investment in the region.

Putrajaya Vision 2040 was unveiled at the virtual Apec Economic Leaders' Meeting by Prime Minister Tan Sri Muhyiddin Yassin, who chaired the meeting. The event was held virtually for the first time due to the Covid-19 pandemic.

In his closing remarks, Muhyiddin reiterated that the core of the Putrajaya Vision 2040 is an open, dynamic, resilient and peaceful Asia-Pacific community by 2040, for the prosperity of the people and future generations.

"Let us now work in solidarity to achieve this vision. Together as an Apec family, we can accomplish this," he said.

During his speech broadcast live on television, Muhyiddin and other leaders held up the vision document to symbolise their adoption.

Muhyiddin then read the key points of the Leaders’ Declaration and announced its adoption amid rounds of applause including from all the leaders.

"It is a clear demonstration of what we are capable to accomplish when we set aside our differences and, of course, focus on shared values," he said.

In 2018, the leaders were not able to come to a consensus on the Leaders’ Declaration and in 2019, the Apec Economic Leaders’ Meeting was cancelled due to the domestic situation in Chile. 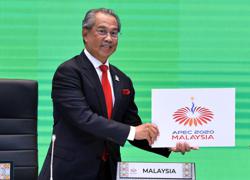 Apec 2020 concludes in KL in a high note