PETALING JAYA: Making it compulsory for all migrant workers to wear wristbands would be a discriminatory move, says Tenaganita.

The NGO's executive director Glorene Das said that if all foreign workers were compelled to wear wristbands in the country, it would be a clear “criminalisation of migrant workers”.

"Clear weaponisation and criminalisation of migrant workers by the government while instilling fear within the community cannot be tolerated and accepted.

“They are not criminals or animals to be tagged, ” she said when contacted Thursday (Nov 19).

Glorene’s statement came after Senior Minister (Security) Datuk Seri Ismail Sabri Yaakob’s remark that the government is mulling whether to make it compulsory for all foreign workers to wear wristbands.

“We cannot prevent them from moving around and we cannot even differentiate between the faces of Bangladeshi workers, Myanmar workers and us.

“We are discussing whether there is a need for all foreign workers to wear wristbands so that we will know when they are out, ” he told a press conference on Wednesday (Nov 18).

Glorene added that there should not be such discrimination or prejudice against migrant communities, which have also contributed to the country.

“There is no need for such discrimination for the communities of migrants who continue to build this country through their levies (taxes), skills, hard work, while working in sectors that continue to be labelled as dirty, difficult and dangerous – some even to the point of death.

“What kind of harsh culture are we cultivating?” she said. 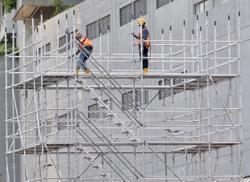