JOHOR BARU: An unemployed man pleaded not guilty at the Sessions Court and Magistrate’s Court to all six charges against him, including for raping and sodomising a 30-year-old woman.

He was alleged to have committed the offence along Jalan Persisiran Perling in Taman Perling here at around 6am on last Thursday (Nov 12), which is an offence under Section 376 (1) of the Penal Code.

The offence carries a maximum 20 years' in jail and whipping upon conviction.

Dinesh Kumar was also charged with sodomising the victim, which is an offence under Section 377C of the same Act, where it carries a maximum jail sentence of not more than 20 years and whipping upon conviction.

Judge Mabel then set bail at RM7,000 for both charges with two sureties and she also ordered the accused to hand over his passport, as well as report to the nearest police station until the case is over.

She also warned Dinesh Kumar not to harass the victim or witnesses involved in the case before setting the next mention on Dec 22, pending medical and chemical reports.

Meanwhile, in the Magistrate’s Court, Dinesh Kumar was also charged with allegedly using force to extort money from the victim at the same location and date at around 7am.

He allegedly committed the offence under Section 385 of the Penal Code, which carries an imprisonment of not more than seven years, or a fine or whipping upon conviction.

The accused was also charged with allegedly causing hurt on the victim by punching her face at the same location and date at around 5.30am, which is an offence under Section 323 of the same Act.

Dinesh Kumar was also charged with failing to produce identification documents to the police along the same location and date at around 6.25pm, which is an offence under Rules 25(1)(a) of the National Registration Rules 1990.

The accused was also alleged to have given false information at the National Registration Department in the Home Ministry Complex here at around 11.45am on Sunday (Nov 15), which is an offence under Section 182 of the Penal Code.

Magistrate Nurasidah A. Rahman then set the bail amount for all four charges against Dinesh Kumar at RM12,000.

Meanwhile, in the same court, Dewi Riskasari Sutardi, 25, and Salwani Yusof, 28, who were the victim’s friends, also pleaded not guilty for causing hurt against her at the same date, location and time.

Salwani was also charged with failing to produce identification documents to the police at Larkin here at around 4.20pm on Nov 13.

Nurasidah then set bail for Dewi Riskasari at RM3,500 and Salwani at RM4,000 respectively and also Dec 22 for the next mention of the case. 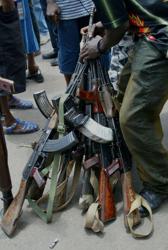