DATUK Seri Shafie Apdal (Warisan-Semporna) defended his decision to advise Yang di-Pertua Negeri Tun Juhar Mahiruddin to dissolve the state assembly and call for a state election, saying he would rather “die in the political arena” than hand over power to his adversaries.

“Rather than handing over power to those who believe in ‘cash is king’ due to the purchasing power they have over assemblymen, I’d rather die in the political arena.

“Not dying of Covid-19, but dying in the political arena for the rakyat.

“When the rakyat choose who they want to be in power, we must accept the decision, ” he said.

Shafie said this during his Budget 2021 speech after Datuk Mohamad Alamin (BN-Kimanis) interjected and asked if he regretted advising the Yang di-Pertua Negeri to dissolve the state assembly, as a state election had caused a spike in Covid-19 cases in Sabah.

At the same time, Shafie said the state election would not have been called if there was no interference from the Perikatan Nasional government on the former Warisan Plus-led state government.

Meanwhile, Shafie said Budget 2021 must be centred on nation-building and take into account the concerns of the private sector.

“Budget 2021 should be used for nation-building, not building a race or religion.

“This is the way forward for a country, ” he said.

Earlier in his speech, Shafie called on the government to beef up the health sector, as it not only required adequate funds but also needed improvement on equipment and labour, particularly in rural areas badly affected by Covid-19.

He said the government should provide housing assistance for medical officers. 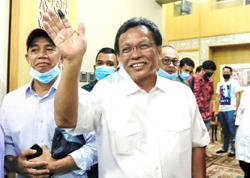