PETALING JAYA: Gerik MP Datuk Hasbullah Osman died of a heart ailment after being admitted to the Raub Hospital in Pahang.

According to an aide, Hasbullah, 63, passed away at the hospital yesterday soon after admission. Missed by many: Hasbullah won the Gerik parliamentary seat in the 14th General Election.

He had attended the Dewan Rakyat sitting earlier in the day before travelling to Raub, the aide said.

Hasbullah, from Umno, was the Temenggor state assemblyman before he contested the Gerik MP seat in 2018.

He won the parliamentary seat with a 5,528-vote majority over Mohd Dahalan Ismail of PAS and PKR’s Ibrahim Mohd Hanafiah in the 14th General Election.

He was appointed as chairman of the government-linked corporation, Syarikat Perumahan Negara Bhd, in May.

Hasbullah was political secretary to Prime Minister Tan Sri Muhyiddin Yassin when he was the deputy prime minister under the Barisan Nasional government.

“Hasbullah had played a big role as political secretary in shaping my political career, which I much appreciated.

“As MP, he had raised many issues affecting the people in Parliament.

“He was a soft-spoken man which endeared him to everyone, ” Muhyiddin said.

“His demise leaves a great gap in the community and country. He was an experienced leader who worked for the community.

“He was a great leader and respected by all. May Allah bless his soul, ” Ahmad Faizal said. 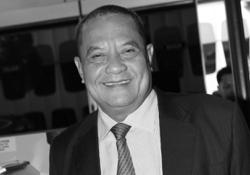