Conditional MCO in all states in Peninsular M'sia except Kelantan, Pahang, Perlis from Nov 9-Dec 6 (updated) KUALA LUMPUR: A conditional movement control order (MCO) will be imposed on all states in Peninsular Malaysia, except in Kelantan, Perlis and Pahang from Nov 9 until Dec 6, says Senior Minister Datuk Seri Ismail Sabri Yaakob.

The Defence Minister said this meant that the current conditional MCO in Selangor, Kuala Lumpur, Putrajaya and Sabah, which is supposed to end on Nov 9, will be extended as well.

Ismail Sabri said the National Security Council (NSC) special meeting had decided to impose the conditional MCO given the spike in Covid-19 cases in the states.

"The Health Ministry discovered that there has been a significant increase in positive cases as well as rate of infections in Kedah, Penang, Perak, Negri Sembilan, Melaka, Johor and Terenggganu.

"Based on the ministry's advice, the NSC special meeting has decided to impose the condional MCO in the states involved," he told reporters during his daily briefing Saturday (Nov 7).

Imposing the conditional MCO will enable Health Ministry officals to conduct targeting testing and limit the movement of the people.

Among the conditional MCO standard operating procedures (SOPs) are no interdistrict or interstate travels except for emergency cases and with police permission, he added.

"Workers who wish to travel between districts must show their work passes and company letters.

"All education institutions in such states are closed while only two people from each household are allowed to go out to buy necessities.

"More details on the SOPs can be found at the NSC website," Ismail Sabri said.

Meanwhile, Kelantan, Perlis and Pahang are still under the recovery MCO given the low number of positive cases there, he added.

"Interstate travels from and to the three states are prohibited except in emergency cases with police permission.

"However, interdistrict travel in the three states is permitted," he added.

Meanwhile for Sarawak, interstate travel from Peninsular Malaysia, Sabah and Labuan is prohibited except for those who received police permission, he added.

"However, interdistrict travel in Sarawak is permitted except to Kuching," he said. 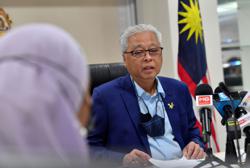