PETALING JAYA: Police are investigating the source of another river pollution case, this time near Kampung Baru Balakong.

"He claimed the pollution was detected near Jalan KB 1/10, Bandar Baru Balakong.

"The complainant went to the area to conduct checks and found black oil floating on the water surface from the waterways at the housing area flowing toward the river," he said in a statement on Wednesday (Oct 28).

He said the complainant believed that there were elements of sabotage involved.

"A team from Selangor CID went to the scene together with Indah Water Consortium, National Water Services Commission and Selangor Water Management Authority.

"Samples of the oil and water have been taken for investigation and prosecution purposes," he said.

The case is being investigated under Section 430 of the Penal Code for allegedly committing mischief by causing a diminution in the supply of water for agricultural purposes, or for food or drink for human beings or for animals.

He said Selangor CID has held a meeting with enforcement agencies on the water issues at the Selangor police headquarters on Oct 20.

"We have agreed to investigate and act in an integrated manner to ensure enforcement, investigations, and prosecutions can be done in total for the interests and well-being of all in Selangor," he said. 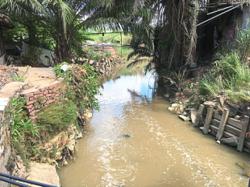