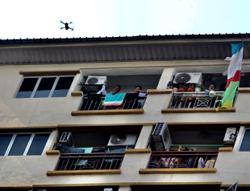 PUTRAJAYA: Elections in the country should be put on hold for the time being as the Covid-19 situation is still at a severe stage, says Tan Sri Dr Noor Hisham Abdullah.

The Health director-general said the country should learn from what happened during the Sabah election, which became the starting point of the current pandemic wave in the state and the rest of the country.

“Even though there are SOPs (standard operating procedures) available, more important is whether the people comply with the SOP.

“We have learned from Sabah, we hope we do not need to repeat the consequences of having an election in other states, ” said Dr Noor Hisham at the ministry’s Covid-19 press conference here on Tuesday (Oct 27).

The Sarawak state election must be held before August 2021.

There is plenty of speculation that the state government might decide to call for polls soon.

The Batu Sapi by-election, which was triggered by the death of incumbent Datuk Seri Liew Vui Keong, is scheduled for a Dec 5 polling day. Nomination has been set for Nov 23.

Dr Noor Hisham said while the ministry can make recommendations, it is still up to the government and the Election Commission (EC) to decide whether to hold elections.

“Our recommendation is not to have an election. But if it needs to be held, perhaps we need to look at different means to organise an election.

“Perhaps we can impose that there will be no crossing of district borders, no organising of large gatherings and no house to house visits.

“These are the things we need to discuss with the EC to improve the situation, ” said Dr Noor Hisham.