Dr Noor Hisham said he did not understand why there was a negative perception of the situation in Sabah, adding that the facts and figures were different than what is perceived.

"It is not true that the health system in Sabah is collapsing, but we admit it is more difficult and more challenging.

"However, we are more prepared this time than before in terms of human resources, facilities, PPE (personal protective equipment) and others. We started preparation much earlier by sending our human resources internally and from other states to assist Sabah," he said during his daily press conference Monday (Oct 26).

Dr Noor Hisham said currently, with the total of 5,713 beds available in the state, only 33% of it was being used although initially, the bed occupancy was high at 70% to 80%.

He added that 69% of 128 beds in the intensive care units (ICUs) were only being utilised, while 33% of 193 ventilator support was being used.

"We are also exploring more space in the nine (designated Covid-19) hospitals, so that we can convert the space into ICU spaces whereby we can treat more stage four patients," he said.

On Oct 22, Borneo Post reported that Sabah's hospital beds were 99.5% full, adding that the state government was also forced to decide who to admit to hospital.

Dr Noor Hisham said that PPE, ventilators and beds have been increased in Sabah to accommodate the growing cases, adding that emergency procurement for the state has also been done.

He said what was more important right now was for "better coordination" in the state where the ministry works closely with the police, army, National Disaster Management Agency (Nadma) and other government agencies.

"This is what we need in Sabah. Hopefully the coordination in the state is enhanced further so we can win this war. We have neither not lost the war, nor have we won it," he said.

Dr Noor Hisham estimated that it would take another four weeks before the virus would be able to be contained in Sabah.

With the majority of the recent Covid-19 deaths coming from Sabah, Dr Noor Hisham said this was because most were mainly elderly patients who probably had lower immunity, and those who had other diseases such as hypertension and diabetes. 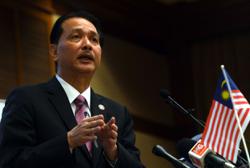