KLANG: The Sultan of Selangor, Sultan Sharafuddin Idris Shah, is saddened by the plight of the people of the state who are struggling with the Covid-19 pandemic, as well as the water disruption.

“His Highness has many times written to the federal and state governments with regard to the water issue since 2009 for the matter not to be politicised,” said a statement from the Selangor Palace.

It said that the Ruler had also requested the federal and state governments to resolve the problem immediately as water is a basic necessity.

“The latest letter from His Highness dated Sept 8, 2020 about the water disruption issue has been sent to the Mentri Besar,” said the statement signed by Sultan Sharafuddin’s private secretary Datuk Mohamad Munir Bani.

The statement said Sultan Sharafuddin had advised and given some recommendations as well as views on overcoming the water disruption.

However, Sultan Sharafuddin said the recommendations he had made to Mentri Besar Datuk Seri Amirudin Shari on overcoming the water issue appeared to have had no effect at all as the problem still persisted and had inconvenienced his subjects.

On the Covid-19 pandemic, the statement said the Ruler was concerned with the increase in the number of new cases in Selangor and the country.

“Following the new developments, His Highness is urging the people to continue adhering to the standard operating procedure (SOP) and not disobey instructions issued by the Health Ministry and the National Security Council,” it said.

It said Sultan Sharafuddin also deeply appreciated the efforts of doctors and nurses as well as other frontliners who had been working hard to care for Covid-19 patients.

“In view of this, do not burden the frontliners because His Highness came to know that there are many people who are not complying with instructions and the SOP that has been set,” said the statement.

It added that Sultan Sharafuddin specifically advised the people to continue being at home, not go out if there was no urgent need to do so and to always wear a face mask in public places.

Sultan Sharafuddin also urged individuals who had been to high-risk locations or places categorised as red zones to report themselves immediately to the nearest health centre to undergo a test, instead of keeping their health status under wraps.

He emphasised the current focus on lowering the risk of infection and eventually stopping the pandemic. 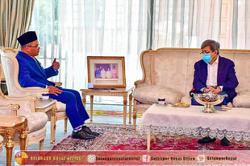