He said that 775 tekongs (skippers) and 316 human traffickers have also been arrested nationwide during the Ops Benteng exercise.

Ismail Sabri said that on Thursday (Oct 15), 37 illegal immigrants and three tekongs were arrested in the operation.

“Enforcement authorities will do more to stop illegal immigrants from entering the country. More surveillance will be done, especially on illegal routes to prevent attempts by them to sneak into the country, ” he said on Friday (Oct 16). 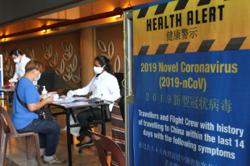