The Sabah Umno chairman said that the political arrangements in the state will go on as usual.

"In Sabah, the government will run as usual and our focus is to prevent and further control Covid-19 infections in the state," he said when contacted Wednesday (Oct 14).

Sabah Umno under Barisan Nasional is in the GRS alliance with Perikatan Nasional and Parti Bersatu Sabah that won the Sept 26 state elections.

The new state government is currently grappling with the Covid-19 spike that has been seeing a three-digit rise since Oct 1, with over 2000 active cases so far.

Bung was responding to the Umno supreme council decision to seek a written agreement with Perikatan amid moves by Opposition Leader Datuk Seri Anwar Ibrahim, who claims he has a majority in Parliament to take over the Federal Government under Tan Sri Muhyiddin Yassin.

He said Umno would consider withdrawing its support for Perikatan if the new conditions were not met, in a move that came hours after Anwar had met the King.

Bung, who is Kinabatangan MP, did not attend the Umno supreme council meeting due to Covid-19 travel restrictions. 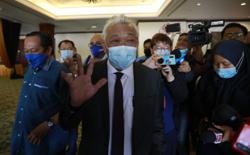