Anwar leaves Istana after audience with the King

Anwar leaves Istana Negara after meeting with the King on Oct 13, 2020. - Reuters

The Port Dickson MP arrived in a black luxury car at about 10.25am and left the palace at 11.30am. It is believed that his audience with the King lasted about 30 minutes.

Scores of media practitioners were waiting in front of the palace gates from as early as 8am.

Anwar, who was seated at the back seat, waved at members of the press as he was leaving.

A group of supporters wearing the Otai Reformis T-shirts were also present, and shouted in support of Anwar.

Police personnel were present to keep the peace.

Using loud hailers, the police reminded everyone present at the palace gates to maintain physical distancing and to wear face masks.

Fahmi: No info yet on time of Anwar's audience with King 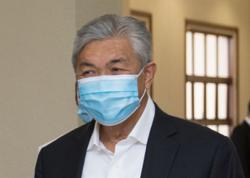