PUTRAJAYA (Bernama): A man who is facing a charge in the Syariah High Court for attempting to commit unnatural sexual intercourse failed in his bid Tuesday (Oct 6) to remain anonymous in a motion to challenge the constitutionality of a provision in the Selangor Syariah law.

Chief Judge of Sabah and Sarawak Datuk Abang Iskandar Abang Hashim, in dismissing the application by the 35-year-old man petitioner, said the court found that there was no cogent reason adduced before the court to justify an anonymity order to restrict the publication of his name.

"Even the affidavit averred that almost all media had not revealed the identity of the petitioner. So, on that balance, I will not invoke my jurisdiction to allow this application. Therefore, the petitioner’s application is dismissed, ” the judge said.

Justice Abang Iskandar, who sat as a single judge, also ordered the petitioner to pay RM1,000 in costs to each respondent - namely the Selangor Government and the Selangor Islamic Religious Council (MAIS).

Earlier, lawyer A. Surendra Ananth, representing the man, submitted that if his client’s name were to be published in media reports, it would invite risk to the latter’s safety and privacy.

"It is respectfully submitted that the application ought to be allowed as it is clear the risk to the petitioner’s safety and privacy outweighs the public interest of the open administration of justice, ” he added.

Meanwhile, Selangor state assistant legal advisor Siti Fatimah Talib who represented the Selangor state government argued that there were no special circumstances that allowed the court to allow the petitioner’s application.

"The petitioner is not a child who needs special protection in which his personal information cannot be disclosed to the public.

"He is an adult. So far, no police report has been lodged by the petitioner that he has been threatened and harassed, ” she said.

MAIS counsel Halimatunsa'diah Abu Ahmad submitted that the legal action was of public interest to all Malaysians, particularly Muslims.

"If the petitioner’s motion is allowed, it may set a precedent for persons who were charged with any criminal offence (Syariah or otherwise) to rely on that decision to secure an anonymity order.

"The petitioner has not shown evidence of any threat or pressure against him personally since his motion was brought in court, ” she said.

Earlier, the court allowed Mais’ application to intervene and to be added as the second respondent on the ground that the council has direct interest in the motion.

However, the court dismissed the Federal Territories Islamic Religious Council’s (MAIWP) application to intervene in the case but allowed it to be present as amicus curiae (friend of court).

The court fixed Dec 14 for hearing of the motion.

The name of the man was not revealed as his counsel had asked the media not to disclose his client’s name.

On May 25, the Federal Court granted leave to the man to commence proceedings by way of a petition against the Selangor Government for declaration that Section 28 of the Syariah Criminal offences (Selangor) Enactment 1985 is invalid.

On Aug 21 last year, the Chief Syarie Prosecutor through the Syariah prosecutor decided to proffer a charge under Section 28 of the Enactment against the applicant in the Selangor Syariah High Court.

The charge was that the man had attempted to commit sexual intercourse against the order of nature with certain other male persons in a house in Selangor on Nov 9,2018.

The man pleaded not guilty to the charge and his trial in the Syariah Court has been stayed pending the outcome of his constitutional challenge on the provision in the Enactment with which he is being charged under.

He filed an application for leave to commence proceedings against the Selangor Government under Article 4(4) of the Federal Constitution on Nov 28,2019.

In his affidavit in support of his application, he said the Federal Constitution's State List's Item 1 does allow the Legislature of the State of Selangor to make laws on the "creation and punishment of offences by persons professing the religion of Islam against the precepts of that religion except in regard to matters included in the Federal List".

He claimed that Section 28 in the Enactment is a matter included in the Federal List and is dealt with by a federal law that is the Penal Code.

He alleged that the Legislature of the State of Selangor had transgressed into the federal list by legislating on a matter on that list. - Bernama 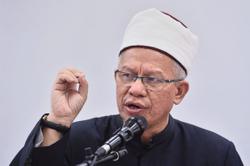