PETALING JAYA: There will be no Cuti-Cuti Malaysia in Sabah – for now – following the spike in Covid-19 cases in the state.

This is after four districts in Sabah – Lahad Datu, Tawau, Kunak and Semporna – have been placed under the targeted enhanced movement control order (MCO) from Sept 29 to Oct 12.

Malaysian Association of Tour and Travel Agents (MATTA) president Datuk Tan Kok Liang (pic) has advised travellers to defer their holiday plans to Sabah, which is the new epicentre of the pandemic.

“My advice is for travellers to defer their travel plans to Sabah until the middle of October due to the MCO.

“It is a setback for the tourism industry, which has been badly affected, but we hope this MCO will curtail the spread of Covid-19.

“There will be no Cuti-Cuti Malaysia in Sabah for the time being, ” he said yesterday.

Tan said the setback in Semporna would be greater as the district was seeing improvement in domestic tourism.

“Since the announcement (of the MCO), it has affected travellers’ confidence to visit Sabah.

“Potential holidaymakers will think twice to go to Sabah with the requirements to undergo swab tests and recommended quarantine, ” he said.

Tan noted that Sabah had been a popular destination among tourists who enjoyed the sights and sounds of the Bornean state.

“Visitors like Semporna for the diving spots and Sandakan for the seafood and wildlife. Kota Kinabalu is famous for its mountainous cityscape and good resorts.

“From the feedback, people love Sabah for its fresh air, good food and friendly people, ” he said, adding that domestic tourism in Sabah had only begun to recover slowly.

“Earlier, we were able to do some business domestically and with some incentives thrown in by the government, it was better than nothing.”

He said that with the targeted enhanced MCO in place, he hoped the pandemic situation would improve soon with no need for an extension.

Tan added that the government should make it clear on the standard operating procedure for swab tests, quarantine and the necessary arrangements for travellers from Sabah.

When contacted, Malaysia Airlines said it would reduce its flight frequency to Tawau following the targeted enhanced MCO.

“Malaysia Airlines will fully adhere to the restrictions set by the government and the Health Ministry.

“In view of this, we will reduce the frequency from two flights to only one flight per day from Kuala Lumpur to Tawau.

“The affected passengers are allowed to postpone their travel as stated in the travel advisory for booking extension and travel flexibility, ” it said, adding that for tickets purchased on and after June 30, the normal terms and conditions would apply.

“Flights for travel period between Oct 1 and 18 can be changed to other travel dates, ” he said.

Raja Sa’adi also noted that there had been a drop in demand for the Kuala Lumpur-Kota Kinabalu route following the recent increase in Covid-19 cases.

“Therefore we have reduced our flight frequency from seven times weekly to three times weekly on Wednesday, Friday and Sunday until Oct 18, ” he added.

On Monday, Senior Minister Datuk Seri Ismail Sabri Yaakob announced that the targeted enhanced MCO in Lahad Datu, Tawau, Kunak and Semporna in Sabah to curb the spread of Covid-19 would last till Oct 12 involving 962,661 residents.

On Tuesday, Health director-general Tan Sri Dr Noor Hisham Abdullah said that individuals returning from Sabah who test negative for Covid-19 should quarantine themselves at home.

Although quarantine was not mandatory for them, he said it would be better for those under self-regulation orders to stay at home and avoid contact with people as much as possible. 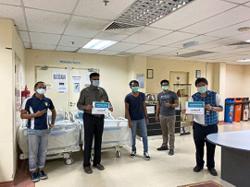