PUTRAJAYA: Tan Sri Dr Noor Hisham Abdullah has denied that the Health Ministry was late in its response to the Covid-19 situation in Sabah, saying that preparations had been made prior to the state polls to help curb the spread of the virus.

The Health director-general said public health interventions were done much earlier, including closure of markets and cooperation with the Armed Forces to tighten the border to stop illegal foreign workers from entering the country.

"The reason we did not announce it is... if we announce a temporary movement control order, we are forcing people to stay at home.

"So, indirectly, we do not want to be seen stopping people from participating in the state election," he said at the ministry's press conference on Thursday (Oct 1).

The Heath director-general said this after he was asked to comment on why official restrictions were only announced on Sept 27, a day after the Sabah polls despite a spike in cases in the state.

Dr Noor Hisham said that the Health Ministry also had issued a standard operating procedure (SOP) for the state election.

"We realised more people were coming home. If we had implemented it on Sept 25, we would be seen as trying to stop people from coming to Sabah.

"So we implemented it at midnight on Sept 26," he said.

However, he apologised for the initial "hiccups" in screening following complaints from passengers who arrived from Sabah after the conclusion of the state polls.

"We have four planes landing at the same time with about 1,000 passengers. There was a long waiting queue.

"Rest assured that it is for the interest of the public. At least you know that you tested negative or positive, so we can isolate you.

"We also did not charge RM250 for the testing," said Dr Noor Hisham.

He cited a few other examples adopted by the Health Ministry such as deploying more doctors to Sabah and preparing equipment such as the protective personal equipment (PPE) even before Sept 27.

"We learn from the past, and we deployed our staff to that area," he said. 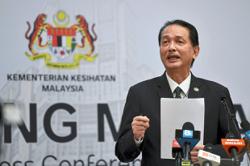