JOHOR BARU: The Statistics Department says about one in 10 Malaysians have completed the Census 2020 online.

Chief statistician and Census 2020 commissioner Datuk Seri Dr Mohd Uzir Mahidin said to date, about 10% have filled their information through the e-Census form in the first phase of Census 2020, which ends on Sept 30.

He also expressed confidence the department would reach its target of 10 million – or 30% of the total Malaysian population of 32 million – participating in the census online.

"There are still a few days left before the first phase ends and we hope that those who have not filled in their information to do so to avoid congestion on the e-Census website.

"The first phase is being implemented through the e-Census, while the second phase, via face-to-face interview, will be from Oct 7 to Oct 24 where we hope to be able to achieve 100% completion," he said when met by reporters at the e-Census clinic at Johor police headquarters here on Sunday (Sept 27).

He added that more than 1,000 e-Census clinics have been set up across the country that operate every day to help with data gathering, which is conducted every 10 years by the government to determine the number of people living in the country, including foreigners.

"Our investigations revealed that the public awareness of the Census 2020 is very high, it is just that we have the habit of doing things at the last minute," he said, adding that he is confident the number would continue to grow in the coming days. 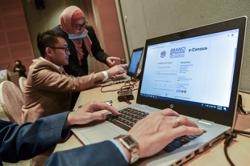 Do your duty and be counted