PETALING JAYA: Iodine must be added to salt being sold in Malaysia as part of a new rule that seeks to tackle iodine deficiency, says the Health Ministry.

Health director-general Tan Sri Dr Noor Hisham Abdullah said amendments made to Regulation 285 regarding iodised salt under Food Regulations 1985 would be in force from Sept 30.

“The amendments mandate that iodine must be added to fine salt or salt which weighs 20kg or less, before being sold in the whole of Malaysia, ” he said in a statement on Friday (Sept 25).

He said that a nationwide study on iodine deficiency disorders (IDD) found that 48.2% of school-going children aged eight to 10 suffered from a lack of iodine, adding that 2.1% of children suffer from an enlarged thyroid gland, a condition known as goitre.

“As such, the implementation of the Universal Salt Iodisation (USI) in Malaysia will help increase iodine intake in society, seeing that salt is a basic ingredient that is needed by everyone regardless of their income, ” he said.

He added that this regulation had already been implemented in Sabah, but would now be expanded nationwide.

He said the Food Safety and Quality Division under the Ministry would be monitoring and enforcing the new regulation.

“Failure to adhere to the amendment of Regulation 285 is an offence and if found guilty, manufacturers and retailers will be compounded no more than RM10,000 or jailed for no more than two years, ” he warned.

Dr Noor Hisham said iodised salt would not adversely affect the taste of food, adding that consumers did not need to increase their intake of salt.

“Consumers are reminded that intake of salt does not need to be increased, because excessive salt in food can lead to non-communicable diseases such as hypertension, ” he said.

If any consumers have any queries about food safety and quality, they can contact the district or state health office. 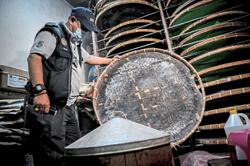