IPOH: An oil palm processing factory was fined RM30,000 by the Sessions Court here for failing to provide a safe environment that caused the death of a visitor.

Engineer Benny Yeoh Cheong, 39, who represented the factory, pleaded guilty to a charge under Section 17 (1) of the Occupational Safety and Health Act (OSHA) before Judge Norashima Khalid on Thursday (Sept 24).

According to the facts of the case, the factory had failed to adhere to a safety precaution at its premises where a visitor suffered a major injury after he was hit by a bulldozer on Oct 8 last year.

The 65-year-old victim was pronounced dead at Manjung Hospital on the same day.

Yeoh’s lawyer, Andrew Soon, said the factory had followed safety measures, including holding a talk on its standard operation procedure, for all its employees.

“The factory also issued a letter to the bulldozer’s driver and it was signed by the driver.

“This shows that the company had done its responsibility to ensure a safe environment at its premises.

“We hope the court would lessen the fine since the factory is not doing well due to the Covid-19 pandemic and has pleaded guilty, ” he added.

Department of Occupational Safety and Health prosecuting officer Eza Marny Marzuki said although the company had pleaded guilty, it does not change the fact that they had failed to provide a safe environment for visitors.

“The factory also failed to provide the necessary training to the bulldozer driver, ” she said.

Separately, the court also ordered an engineering company to pay a total of RM18,000 fine in default of six months’ jail after a worker suffered a permanent injury on a segment of his middle finger.

The company was represented by its project supervisor Haimi Rahi, 43, who pleaded guilty to the charge under Section 15 (1) of the OSHA after his charge was read in court. 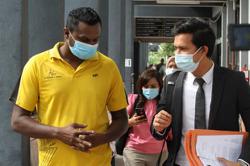