KUALA LUMPUR: The Works Ministry is awaiting the finding of investigations into a falling wall slab that almost resulted in the death of a woman along the Middle Ring Road 2 (MRR2) before deciding on its next course of action.

“From then on we will come up with the findings and share it with you – what the action taken will be, the way forward in particular high-risk areas to make sure safety and health is taken care of,” said minister Fadillah Yusof.

When asked if any action has been taken against the contractor involved, Fadilah said it would depend on the findings of the investigation by the various groups.

The Construction Industry Development Board (CIDB) as well as the Department of Occupational Safety and Health (DOSH) are carrying out the probe on the mishap, he added.

“I have gone personally to see the site. What we are looking at is from different perspectives.

“One is from a design perspective, if there are any faults in the design. Secondly is monitoring and supervision.

“Thirdly will be on the role of the independent checkers, engineers and the safety and health perspective,” he told reporters yesterday after a dialogue session with construction industry players.

During the 5.45pm incident on Saturday, a woman was inches away from certain death, but instead escaped with just an injured left hand after the concrete slab from the construction of the Sungai Besi-Ulu Klang Elevated Expressway (SUKE) fell and hit her car.

In a speech earlier, Fadillah said he wanted the commitment from all players from the construction industry to ensure safety at their work sites.

“Safety and health, to me, is very important. It has to be given emphasis and focus.

“This is one of the areas that should be discussed in detail,” he said in a speech.

Fadillah said the industry had to ensure the safety of not only their workers, but also members of the public passing by construction sites. 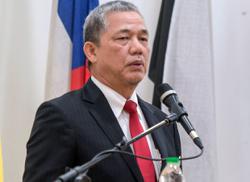