KOTA KINABALU: The sister of Sabah Governor Tun Juhar Mahiruddin (pic) will be carrying the Warisan flag in a bid to take over Sungai Sibuga seat, the stronghold of former chief minister Tan Sri Musa Aman.

Datuk Armani Mahiruddin, 54, believes she can serve the semi-rural constituency in Sandakan as she prepares to face a five-cornered fight against Barisan Nasional, LDP, Parti Cinta Sabah and Parti Perpaduan Rakyat Sabah.

“There is a lot of things that can be done in Sungai Sibuga, ” said Armani, who is former Sabah Umno Wanita chief and Dewan Negara deputy speaker.

The seat has been held by Musa since 1994, but he was dropped as a candidate by Sabah Umno and replaced with Mohamad Hamsan Awang Supian.

Another seat, Sungai Manila, has been carved out of Sungai Sibuga in the Libaran constituency. Sungai Manila is the more semi-rural seat while Sibuga now comprises parts of the urban Sandakan town.

Armani had left Umno to join Warisan shortly after the Warisan coalition took over the state government in the aftermath of the 14th General Election (GE14) in 2018.

In a Facebook post earlier this week, Musa had announced his intention to contest the Sungai Manila seat but Barisan did not name him as its candidate for the seat.

Musa and the Governor have in legal tussles over the last two years, going back to his removal as chief minister hardly 36 hours after he (Musa) had been sworn in; he was replaced with Datuk Seri Mohd Shafie Apdal. He filed a suit against Juhar over his removal.

Musa and 32 assemblymen also filed a suit to stop the July 30 dissolution of the Sabah state assembly by Juhar.

Both suits were thrown out by the High Court and the Court of Appeal recently.

The Sabah elections are being held after Musa rallied 33 assemblymen to lay claim to the state government, but Shafie requested the Governor dissolve the assembly.

Meanwhile, Armani claimed that Musa’s influence in the area was waning but that they respected him as a former state leader.

Armani in five-cornered battle for Sg Sibuga, seat of ex-CM 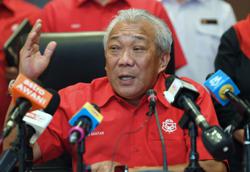