LRT to get pink feeder buses 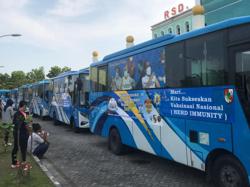 KUALA LUMPUR: Pink buses are making a comeback in the city, but they are not the zippy mini buses of the past.

Instead, they are full-sized passenger buses serving as dedicated feeder buses for LRT stations along the Kelana Jaya line.

The inspiration behind the move to introduce LRT feeders came from the fleet of MRT feeder buses owned by Mass Rapid Transit Corporation Sdn Bhd (MRT Corp), where this fleet of white buses sporting dashes of red and blue is a clear signal to commuters that they will call at MRT stations along the Kajang Line (formerly known as the Sungai Buloh-Kajang Line).

Rapid Bus, which has been operating the MRT feeders since three years ago, found them to be effective in drawing commuters, who not only use them to get to MRT stations, but also to other strategic locations along the bus route.

“Based on the success of the MRT feeders, which carry an average of 1.3 million passengers each month, we have decided to do the same for the LRT stations, ” said Prasarana chairman Datuk Seri Tajuddin Abdul Rahman as he launched the first pink feeder bus at the Sri Rampai LRT station here yesterday.

“With this move to brand the LRT feeders distinctly, we hope to increase the ridership of these buses to 963,000 passengers a month, ” he said. “This project will lend a new look and help the public distinguish from afar Rapid KL buses that go to LRT stations versus those that don’t, ” said a Rapid Bus official.

Several designs and colours were mooted, but in the end, pink, or rather fuschia, was chosen because it really stood out, making it easier for people to see it from a distance.

According to Rapid Bus, other enhancements to increase bus ridership include revamping three routes (T221, T250, T223), rescheduling buses for several routes and the public sharing of real time bus locations (including MRT feeders) via Google Maps and Moovit.

“We could see that since we introduced the unlimited travel passes such as the My100 and My30, there has been a shift from bus to rail when it comes to commuting.

This initiative is able to lend even more connectivity for those wishing to use the LRT, ” said Tajuddin.

Just like the MRT feeder, a ride on the LRT feeder costs RM1, with users of My30 and related passes entitled to unlimited rides on both rail and bus until Dec 31.

Go to www.myrapid.com.my for more information. 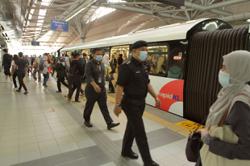