Those with expired road tax between one and three years can renew without Puspakom checks, says Dr Wee

PUTRAJAYA: Those who have not renewed the road tax for their vehicles between one and three years can now do so without having Puspakom checks, says Datuk Seri Dr Wee Ka Siong (pic).

The Transport Minister said this however is only applicable for private and individual vehicle owners.

The exemption is not applicable for commercial vehicles such as buses, lorry and e-hailing vehicles to ensure safety of the public, said Dr Wee.

“We have been getting a lot of requests from people so we made a decision that those whose road tax have expired between one and three years can renew it.

“Before this, those with expired road tax (more than a year) would need to undergo Puspakom or Road Transport Department (JPJ) checks.

“However, as some people are facing hardships due to Covid-19, we are giving this exemption, ” he said in a press conference after witnessing a memorandum of understanding (MoU) signing for a strategic collaboration programme between JPJ, Universiti Teknologi Mara (UiTM), Universiti Kebangsaan Malaysia (UKM) and Department of Skills Development under the Human Resources Ministry on Thursday (Sept 3).

Dr Wee said to date, there are 4.274 million vehicles that have expired road tax of between one and three years.

Meanwhile, Dr Wee also announced an extension of the 70% discount on summonses.

Initially, the discount was in conjunction with the National Day last month.

However, the discount has been extended till the end of September, he said.

“We found that many are unable to renew their licence because they have been blacklisted for not paying their summonses.

“Many are looking for jobs and some want to work with e-hailing or food delivery companies but they need a licence so we are extending the discount.

“But this is also a lesson because if they are wrong, they still need to pay, ” he said.

This discount offer is not applicable for summonses issued by the police.

On a separate issue, Dr Wee said there should be dedicated lanes for motorcyclists to ensure their safety, although that is dependent on the financial capacity of the government.

He said having a dedicated lane for motorcyclists would require it being separate from the current road system.

This requires space and financial allocation, which is under the Works Ministry.

Earlier, Dr Wee who witnessed the MoU signing, hoped that the strategic collaboration will produce JPJ officers with higher-order thinking skills, digital capabilities, creative and are able to think out of the box.

Dr Wee said the collaboration is part of the long-term plan by JPJ to further enhance the department’s workforce.

He said improving the performance of the public service sector has always been the development agenda of the nation as this would produce an efficient civil service that can serve the rakyat and the country. 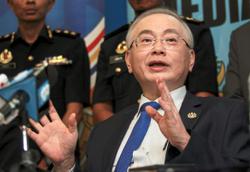