JOHOR BARU: A major illegal moneylending syndicate targeting gambling addicts and businessmen whose ventures became vulnerable due to the Covid-19 pandemic has been uncovered by the police.

From anti-loan shark crackdowns, police discovered that the syndicate operates not only throughout the country, including Sabah and Sarawak, but has links across the Causeway.

Johor police chief Comm Datuk Ayob Khan Mydin Pitchay said within the first eight months of this year, state police had opened 398 investigation papers on Ah Long activities.A task force has also been created to track down and arrest all those involved in such illegal business.

“Between Aug 15 and Aug 23, police arrested 12 suspects in a series of raids here in Batu Pahat, as well as in Kuala Lumpur and Selangor, ” Comm Ayob said during a press conference at the state police headquarters yesterday.

Those arrested are aged between 23 and 46, and they are being investigated under the Money Lending Act 1951, Sections 427,435 and 436 of the Penal Code, as well as the Prevention of Crime Act (Poca).

“This syndicate targets Malaysians working in Singapore who made their loan applications online. 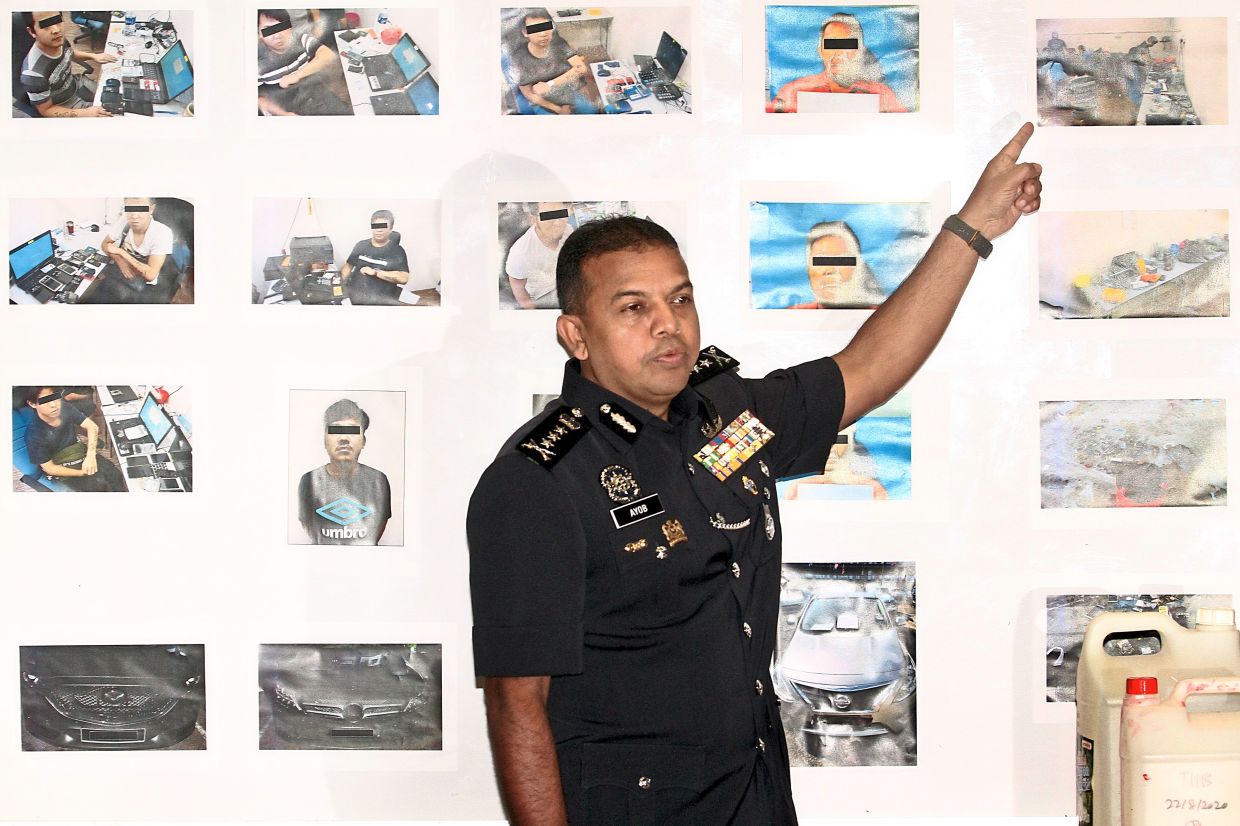 Putting a face to the crime: Comm Ayob showing photos of loan sharks during a press conference at the state police headquarters in Johor Baru. — THOMAS YONG/The Star

“Most of those who borrowed money are gambling addicts, while others borrowed money for businesses. When they could not repay their loans, the loan sharks would harass them and their families.

“The loan sharks even forced borrowers to do the dirty job of harassing, such as throwing paint and Molotov cocktails at people’s houses.

“If the borrowers do the job given to them, then the loan sharks will give them some discounts on their loan amount, ” said Comm Ayob.

He added that the loan sharks would also record such acts on video before sending it as a warning to delinquent borrowers.

During one raid, he said, the suspects were caught burning mobile phones and SIM cards to prevent the police from confiscating them.

He urged the Malaysian Communications and Multimedia Commission to investigate mobile phone shops that sell SIM cards in large quantities without registering the buyers.

Loan sharks prey on lovelorn ladies for side income

Dirty jobs outsourced for up to RM1,000 a pop