The Malaysian badminton team showing off the Thomas Cup trophy after beating Indonesia 3-2 in the final on May 17,1992.

IT was past midnight on Sunday morning, but almost every household in Malaysia was awake.

And then at 12.36am, there was a huge roar throughout the country. Malays, Chinese, Indians, Kadazandusuns, Ibans, the mixed races – all were screaming with joy.

It was a special occasion – Malaysia’s Thomas Cup victory on May 17,1992. And it’s an event that’s still being spoken about with much passion and pride 28 years on.

Former badminton great Cheah Soon Kit was one of the winners that day, and he understands well why that success is so memorable.

It was not just about beating mighty Indonesia. It was about everyone coming together as one country – united in joy, even in our diversity.

Cheah remembers vividly the euphoria of winning the Cup. It was he, along with Soo Beng Kiang, who stormed past Ricky Subagja and Rexy Mainaky to deliver the winning point at Stadium Negara.

There were celebrations everywhere with Malaysians young and old and from different races, creeds and cultures taking part. 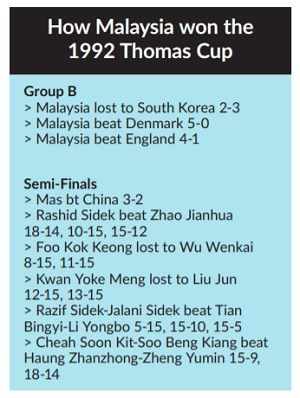 Cheah also remembers the long hours of training, grit, team camaraderie and unity that led to the success.

He was one of 12 young talents selected under the Marlboro Project 1988-90, which was launched in 1987 to kickstart the campaign to regain the Thomas Cup Malaysia last won in 1967.

“When the project was launched, we were just a few years into recovering from the global financial crisis. Our badminton was going through a slump too, ” he recalled.“It seemed like troubled times, but we pulled through.”

With China’s Fang Kaixiang cracking the whip, there was an immediate result when the project team reached the finals in 1988.

Under Coach Yang Yang, Malaysia reached the finals again in 1990. On both occasions, Malaysia lost to mighty China.

Two years later, Cheah-Soo and the rest of the team – Rashid Sidek, Foo Kok Keong, Razif Sidek-Jalani Sidek, Kwan Yoke Meng, Rahman Sidek and Wong Ewee Mun – shocked China in the semi-finals before pulling the rug from under Indonesia in the finals.No other Malaysian team has won the Cup since then.

“Everyone on the team had different personalities and views but when we played, we played with one heart and one soul, ” said the 52-year-old Cheah.

“The training was challenging and expectations were high, but we overcame every barrier due to our determination to win.

“People still talk about it because they saw the fighting spirit in us. They could relate to it although they were from different races, religions and cultures.

“I hope we can revive the same spirit to overcome the challenges we are facing right now with Covid-19, ” Cheah added.

“The changes took place in badminton when Tan Sri Elyas took charge. He made many improvements that brought the sport back to the top, while Datuk Gunalan kept the team together, ” he said.

“We played and ate together. Sometimes we quarrelled, but which family doesn’t?

We stuck together because of our common vision – to bring back the Cup for Malaysia, ” added Rashid.

It was at the Cup Finals that Rashid defeated Denmark’s Poul-Erik Hoyer and Zhao Jianhua of China for the first time.

“Fans played a big part in our success. I’ll never forget the atmosphere at Stadium Negara – it was packed to the brim and electrifying, ” said Rashid.

The fans certainly played a big part in Foo’s amazing fight in his 15-8,15-11 win over Wu Wenkai and he justified their support with his never-say-die performance, battling for every point and at times, diving full-length to retrieve the shuttle amid oohs and aahs from the stands.

When the Cup was paraded in some of the states, team captain Razif said thousands of people turned out to show their support.

“Sports can unite people no matter how different we are – that’s the beauty that I saw in 1992 and hopefully, this legacy will go on. No matter what challenges we go through as a nation, we need to stay united, ” added Razif.Kwan said everyone on the team played their part.

“Some won during the qualifiers and others during the finals. Win or lose, we supported one another and that really made the difference, ” added the 54-year-old.

“Years of hard work and team unity brought us that result. I hope our next team will show the same fighting spirit and achieve good results, although the tournament this year has been affected by the Covid-19 pandemic.”

Barring any upsets or decision to postpone or cancel it, Malaysia, led by Lee Zii Jia, will take part in the Thomas Cup Finals in Aarhus, Denmark, from Oct 3-11.