EVEN though Plantation Industries and Commodities Minister Mohd Khairuddin Aman Razali paid a RM1,000 fine and offered to donate four months of his salary to the national Covid-19 fund, questions on the circumstances of his non-compliance to the mandatory 14-day quarantine continue to be raised.

A lawmaker has called on the Health Ministry to make recommendations to the police who are investigating Mohd Khairuddin for flouting quarantine regulations.

“Although it is a police probe, the Health Ministry has the power to give its recommendations as this is a serious issue,” Bandar Kuching MP Dr Kelvin Yii told reporters at a press conference in Parliament yesterday.

“The issue was not raised by the Opposition but by the rakyat who felt that there was a double standard in the case,” he said.

Mohd Khairuddin returned from Turkey on July 7 and had undergone several Covid-19 tests, which cleared him of having the infection.

Last week, Seputeh MP Teresa Kok claimed in Dewan Rakyat that the minister did not undergo quarantine after returning from abroad but was seen in Parliament on several occasions.

On Aug 22, the Health Ministry said it issued a RM1,000 compound to Mohd Khairuddin on Aug 7.

“The normal rakyat such as the pink wristband woman and Haji Salleh were fined more than five to ten times the amount while the minister is protected,” Mahfuz said when asking Minister in the Prime Minister’s Department Datuk Seri Mohd Redzuan Md Yusof a supplementary question on enforcement and compliance of Covid-19 movement control order regulations.

Mahfuz also noted that Senior Minister Datuk Seri Ismail Sabri Yaakob had previously announced in early August that those flouting quarantine regulations would no longer be compounded, but be hauled to court.

Abdul Azeez interjected and reminded Mahfuz that the minister went to Turkey to save the nation by bringing in RM82bil in investment.

“The minister should be praised and not vilified,” Abdul Azeez was heard shouting as Dewan Rakyat Deputy Speaker Datuk Mohd Rashid Hasnon called for order.

In reply, Mohd Redzuan denied there was a double standard in the enforcement of the Covid-19 regulations and informed lawmakers that the government would consider increasing the maximum compound for non-compliance if necessary.

“A decision and announcement will be made if the compound amount is to be increased to ensure that people are more sensitive to the current situation,” he added.

Denying that there were double standards, Deputy Health Minister Datuk Dr Noor Azmi Ghazali said the Prevention and Control of Infectious Diseases Act 1988 (Act 342) only provided a maximum compound of RM1,000 against those who breached regulations.

He said this in reply to a supplementary question from Nik Nazmi Nik Ahmad (PH-Setiawangsa) during Question Time, where Nik Nazmi asked the Health Ministry if a higher compound should be imposed on Mohd Khairuddin.

Dr Noor Azmi said if there were other serious breaches, relevant agencies such as the police would investigate the case.

“If there are cases brought under Section 24 of the same Act to the court, it will be up to the court to make such decisions regardless of the individual,” he added.

“Russia is still in the midst of conducting phase three of its clinical trials. We will wait for the report from Russia regarding the vaccine,” he said, adding that the Health Ministry had been allocated RM1bil to fight Covid-19.

“As of Aug 7, RM720mil has been spent on purchasing equipment, medicines, consumables, personal protective equipment, test kits and other services,” he said. 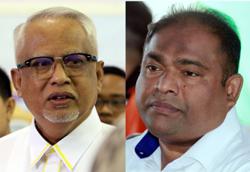