KOTA KINABALU: Officials at the Lok Kawi Wildlife Park are doubling their efforts to check and strengthen their animal enclosures to prevent any more animal escapes after a male clouded leopard broke free on Sunday (Aug 23).

Sabah Wildlife Department director Augustine Tuuga said although they have checked all their cages and enclosures daily, it is unfortunate that the clouded leopard named Tumba managed to break open the chain link fencing of its enclosure in the morning.

“It is lucky that another male clouded leopard named Boboi which was also kept in the same cage, did not follow suit, ” he said.

The two clouded leopards have no separate sleeping and exhibit area unlike many of the other animals in the park.

“We hope to make a special and separate sleeping area for these two animals if we have extra funds, because now their exhibit cage where visitors come and see them is also their sleeping area, ” Tuuga said.

He said this could be not as comfortable compared to what the animals are used to in their natural habitat.

He said after Tumba’s brief escape from the park, he was recaptured at 8.45pm and sent to the animal clinic for health monitoring while Boboi is placed elsewhere as repair and reinforcement works are being done.

Tumba was discovered roaming within the Wildlife Park area before he was tranquilised and recaptured.

“They will be placed back to their exhibit enclosure once everything is settled, probably by next week, ” Tuuga said, adding safety features were being accessed as well. 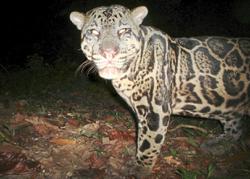