A visitor hiding food in one of his palms while the civet sniffs then find it.

KOTA KINABALU: Enjoy having a python draped around your shoulders, learn about civets and admire a colourful Macaw parrot flying around while you sit and absorb snippets of information given out by a friendly guide.

These are some of the things one gets to experience apart from looking at the animals at the Lok Kawi Wildlife Park now that its animal show has returned.

This animal show ceased operations for about six months due to contractual issues, and it is now back with more educational activities lined up.

Sabah Wildlife director Augustine Tuuga said the animal show which is available daily except Friday, for two sessions - 11.15am and 3.15pm - would now focus more on education programmes, volunteerism and enrichment programmes.

“Visitors can not only interact with our chosen wildlife, they will also learn about the behaviour and natural habitat of the animals as well,” he said.

He said students and visitors can also opt to join in volunteer activities such as making enrichment toys and furniture for the animals, feeding and so on. Visitors learning about how binturong uses their tails to hang on branches in their natural habitat.

Tuuga said the purpose was to educate, create awareness and let visitors learn while having fun.

He explained that the animal show had to be put on hold for the past six months or so as the Singapore-based company that ran the show since 2008 did not wish to renew its contract.

“So we had to stop the shows. The animal show is among our main attractions for visitors at the park,” he said.

Tuuga said fortunately, the Singapore-based company’s former staff members, who are locals, have been well trained in doing their jobs for years.

“So they got together and set up their own company - Borneo Behavior Solutions - to run the animal show in the park now,” he said.

This is also a positive development for local talents, now that they are their own bosses and they run their own show.

Tuuga said the programmes conducted at the wildlife park are subject to strict audits from relevant bodies including NGOs such as Wild Welfare to ensure that the management and activities conducted with captive animals were correct and humane.

Wild Welfare is an international NGO that challenges practices that compromise animal welfare, improve captive animal welfare in substandard facilities, and works with leading zoos, academic and animal welfare organisations, among others. 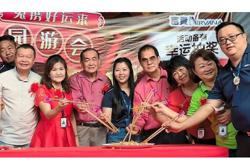