He said this meant Bintulu district had turned from a green zone to yellow with the detection of the two new locally transmitted cases.

Uggah said two of the new cases were Indonesian construction workers in Kuching who underwent Covid-19 screening at a private hospital on Sunday (Aug 23) prior to applying for a new job and were found to be positive the same day.

He said another Indonesian working at the Samalaju industrial area in Bintulu went for a test at a private hospital in Bintulu on Aug 22 for the purpose of returning to his country.

"The test result came back positive on Aug 23. The case has been admitted to Bintulu Hospital for treatment.

"He has been in Sarawak since 2015 and has no overseas travel history," Uggah said.

Of the local cases, he said one was a woman who was tested for Covid-19 on Aug 23 prior to an antenatal check-up and found to be positive the same day.

The other case is a worker who returned to Bintulu from an offshore platform on Aug 20 and was quarantined in a hotel.

He was tested on Aug 21 and the result returned positive on Aug 23.

Uggah said all five cases had been admitted to hospital and were asymptomatic.

"Further investigations and active contact tracing for all five cases are ongoing.

"The state Health Department will also conduct more surveillance at Sarawak's ports. On all fronts, we are trying to ensure that any cases will be detected early," he said. 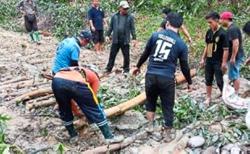