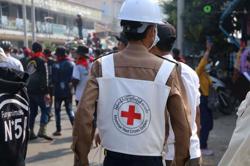 CYBERJAYA: Malaysia needs to be a high-tech country for it to achieve its aim of becoming a high-income nation, says Prime Minister Tan Sri Muhyiddin Yassin (pic).

Muhyiddin said history had shown that the economic and military strengths of a country depends on its mastery of technology.

Muhyiddin said Malaysia’s gross domestic product (GDP) was higher than that of South Korea and Taiwan two decades after the Second World War.

“Their success was due to none other than the mastery of technology,” said Muhyiddin at the launch of the National Technology and Innovation Sandbox (NTIS) here yesterday.

Muhyiddin said the launch of NTIS is at the right time, especially in light of Covid-19.

“The pandemic has changed our way of lives. However, in the new norm, there are opportunities for the government to look into certain sectors that need to be enhanced to develop the nation and help the rakyat,” said Muhyiddin, who also urged both private and government entities to work together in making the innovation agenda come true.

“Through NTIS, start-up companies, technology developers, researchers and innovators can carry out projects in a sandbox or controlled environment.

“I believe by looking into some current regulations and providing some leeway will enable the testing and development of new technologies,” he said, adding that six pilot projects have been identified under NTIS.

These are the first Malaysian-made delivery robot for hospitals to assist healthcare frontliners deliver care to Covid-19 patients; a lightweight robot used in agriculture to increase work efficiency and reduce the number of workers required; an easily scalable semi-ventilator to assist patients with breathing difficulties; a robot to assist recovery of stroke patients and other medical conditions; a drone to automate high-precision pesticide spraying; and pick-and-place linear robots for the manufacturing industry.

RM100mil will be disbursed by the end of the year to fasttrack the development and commercialisation of technology projects, especially those with the highest potential to boost key sectors such as healthcare, manufacturing, agriculture, education, as well as travel and tourism.

The government hopes to receive 100 submissions per cohort, with new cohorts every month.

To date, 658 submissions have been received, and 94 completed applications under the first cohort have been processed.

During a press conference, Khairy said his ministry will apply for extra funding in Budget 2021 for commercialisation of some of NTIS’ most promising projects.

Khairy added that his ministry has been discussing with Tan Sri Dr Jemilah Mahmood, the under-secretary general for partnerships at the International Federation of Red Cross and Red Crescent Societies, about the scalable semi-ventilator.

“We have been talking to Tan Sri Jemilah about (the possibility of) supplying these ventilators to field hospitals around the world where Red Cross operates, so that is where the commercialisation comes in,” said Khairy.

He added that he will ask the Cabinet to give preference for locally developed technologies under NTIS for future government procurement.