KUALA LUMPUR: Majlis Kemakmuran Bumiputera (MKB) has been formed to address and empower the socioeconomic development of bumiputra in the country, says Tan Sri Muhyiddin Yassin.

The Prime Minister said the Perikatan Nasional government was committed to making the bumiputra agenda its “national priority”.

He said although there have been successes in improving the standard of living of the community, the socioeconomic position should be further boosted.

“The government has set up MKB as the highest platform to empower the socioeconomic development of the bumiputra.

“I will chair the council to steer and speed up the economic empowerment of bumiputra,” he told Datuk Seri Dr Mujahid Yusof (PH-Parit Buntar) during Question Time at Parliament.

Mujahid had asked the government to state the measures taken to improve the socioeconomic development of bumiputra, especially when unemployment numbers have risen without affecting the opportunities of other races.

Muhyiddin said bumiputra had the highest poverty rate, which stood at 7.2% last year, as compared to 1.4% among the Chinese community and 4.8% in the Indian community.

“The bumiputra equity ownership in the corporate sector stood at 16.2% in 2015 as compared to 30.7% for non-bumiputra and 45.3% for foreign ownership.

“Last year, the unemployment rate for bumiputra was at 3.7% in comparison to the national average of 3.3%,” he said.

Muhyiddin said the government was also committed to making the bumiputra agenda a success through the Shared Prosperity Vision 2030 and the 12th Malaysia Plan that would be tabled early next year.

“I am confident that all parties will put in their best efforts to make all the plans a success.

“We will improve the socioeconomic standing of the bumiputra without jeopardising the rights and opportunities of other races, in order to share the prosperity of the country together,” he said.

The Prime Minister also announced that the Bumiputra Agenda Steering Unit (Teraju) would be the main coordinator in the socioeconomic development of the community.

“Teraju will be the main coordinator in terms of bumiputra data bank across ministries, agencies and government-linked companies.

“Bumiputra will be given a multiple lift to inculcate an entrepreneurial culture at various stages.

“The entrepreneurial culture will continue to be inculcated in an integrated manner through the roles of other agencies such as Perbadanan Usahawan Nasional Bhd, Majlis Amanah Rakyat and other bumiputra-related agencies,” he said.

On the special bumiputra units in government agencies and departments, Muhyiddin said the new council would look into sectors where bumiputra were left behind such as manufacturing, banking and agriculture.

“Teraju will gather all the data so that we will be able to have more focused action,” he told Datuk Seri Dr Ahmad Zahid Hamidi (BN-Bagan Datuk).

On the status of the Buy Muslim First campaign, which was supported by Umno and PAS, Muhyiddin said due to the gloomy economic outlook, the government had launched the Buy Malaysian Product campaign to help resuscitate the economy.

“This is to promote the purchase of local products and priority will be given to halal products.

“I hope with these efforts, it will create a new interest to purchase our own local products at a more competitive price with a better quality and affordable to Malaysians,” he said. 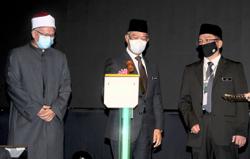