The Pekan MP, who was sentenced to 12 years’ jail and a RM210mil fine, is currently out on a RM2mil bail after being granted a stay of execution pending an appeal to the higher court.

Mastika Lagenda was an investment holding company for Genting Sanyen Power Sdn Bhd, previously acquired by 1MDB after getting a blanket approval from Najib who was the finance minister in 2012.

Shahrol, who is the ninth prosecution witness, said he had obtained a blanket approval to proceed with the acquisition of Mastika Lagenda despite no written approval.

“There was no specific approval but the board of directors (BOD) was aware of Mastika Lagenda.

“The board moved quickly because we didn’t specifically brief the board, ” he added.

The witness also agreed to a suggestion by Wan Aizuddin that the deal was “a sham” to deceive the BOD.

“At the material time, I didn’t know. But now, in hindsight, yes (I agree), ” Shahrol said.

The witness was also questioned repeatedly by the defence for his alleged involvement with fugitive businessman Low Taek Jho – better known as Jho Low – and other individuals in 1MDB.

Shahrol denied that he omitted International Petroleum Investment Company (IPIC)’s name as the guarantor for a US$1.75bil (RM7.39bil) bond or borrowing by 1MDB as a means to mislead the BOD.

He denied Wan Aizuddin’s contention that some “US$790-odd million” was transferred to Aabar Investment PJS Limited and that Shahrol had not objected to the transaction as he was part of a criminal scheme together with Low, 1MDB general counsel Jasmine Loo, 1MDB deputy chief financial officer Terrence Geh, 1MDB chief financial officer Azmi Tahir and officers from Goldman Sachs to embezzle millions of dollars from 1MDB. 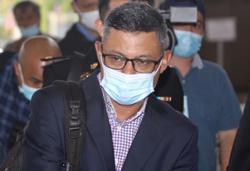