This is after the High Court ordered for Najib’s existing bail of RM1mil to be increased by another RM1mil as one of the two conditions for him to be released pending an appeal to the Court of Appeal.

With the latest bail paid, Najib’s total amount of bail paid for all his court cases stand at RM7mil.

The 67-year-old Pekan MP arrived at the Kuala Lumpur Court Complex at around 1pm with his son Norashman, who was one of his two bailors.

Najib was seen leaving the criminal High Court registry and subsequently, the court complex at around 1.30pm amid scores of media personnel who had waited for him since morning.

As he passed by the media, Najib jokingly said the photographers had already shot many photos of him when he was convicted on Tuesday.

Najib was convicted by the High Court on grounds that his defence had failed to raise reasonable doubt on all the charges levelled against him. He was sentenced to 12 years in jail and fined RM210mil in default five years in jail.

He is appealing against the decision.

Besides the increase in bail as one of the two conditions imposed on Tuesday, Najib is also required to report to the nearest police station twice a month. 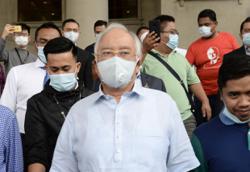