KUALA LUMPUR: Three main issues were considered in the amendments to the Road Transport (Amendment) Bill 2020, which was tabled for its first reading in the Dewan Rakyat.

Transport Minister Datuk Seri Dr Wee Ka Siong said the Bill was aimed at addressing the issue of reckless and dangerous driving, driving under the influence of drugs as well as drink driving.

"These are the issues which were considered in the amendments especially under Section 41 until Section 45," he said during a special briefing with the media in Parliament on Monday (July 27).

Among others, the Bill proposed that those charged under Section 41 under dangerous or reckless driving could face between five and 10 years jail as well as a fine of not less than RM20,000 and not exceeding RM50,000.

Dr Wee said those driving recklessly including those who fell asleep while behind the wheel, adding that they too could be charged under the law.

"You are also liable and can be charged. If you caused any death, these will be the penalties for you, we are serious," he said, when asked if the law is applicable to those who fell asleep while driving.

"If you cannot control your car, it means it is reckless driving," he added.

He said punishments for offences related to "basikal lajak" (modified bicycles) and other micromobility vehicles will be increased under the Bill.

"If they are above 21 years old, we will charge them. But if it involves minors, the parents or guardians who allow them to go out late at night will be fined," he said.

The Bill stated that an offender who rides a micromobility vehicle under the influence of alcohol or drugs will be fined between RM1,000 and RM5,000 and shall be liable to imprisonment of not more than a year.

Asked to comment on the use of breathalysers during roadblocks during the Covid-19 pandemic, Dr Wee said the relevant authorities have a clear standard operating procedure (SOP) on the matter.

"You need to follow the SOP by the manufacturers and that is not a big problem in terms of the hygiene aspects," said Dr Wee. 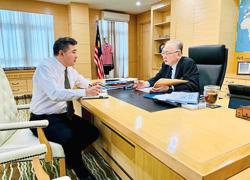