Only ten animals per mosques for korban during Hari Raya Aidiladha due to rising Covid-19 cases, says Ismail Sabri

The Senior Minister (Security) said that for korban, the government had decided to limit the number of animals to a maximum of ten animals at mosques and surau as well as other designated locations.

“This limit is however based on the size of the area. If it is a small place, then maybe only six animals will be allowed, ” he said during a press conference on Monday (July 27).

He said that the government however encouraged korban to be done at the 28 slaughterhouses under the Veterinary Department or at the 31 licensed private slaughterhouses.

Ismail added that the number of people allowed during korban is 20 per animal.

He also said that a feast would not be allowed at the korban sites, although packed food can be distributed there.

Ismail said that korban at mosques and surau is limited to four days, including the first day of the Hari Raya Aidiladha, which falls on Friday (July 31).

He however said that because it falls on a Friday, it is encouraged to conduct korban on the second and third day of the celebrations.

As for feasts in the house, Ismail said that no more than 20 people are allowed at any one time.

“If any individuals wearing wristbands violate the quarantine rules, the public is urged to report them to the police, ” he said. 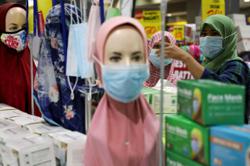