"There is forced coercion on leaders in Sabah to switch allegiance and even agents who have been ordered to coax elected representatives to party hop.

"This is far from what the King had advised in his Royal Address," said Azis when debating the motion of thanks on the Royal Address in the Dewan Rakyat.

Azis told lawmakers that he had accompanied Isnaraissah Munirah Majlis (Warisan-Kota Belud) on Wednesday (July 22) to lodge a police report over alleged harassment through WhatsApp by an individual asking her to switch her support to Perikatan Nasional.

Azis then showed the screenshot of the WhatsApp message and read it out in the House.

"I have been instructed by No.1 to get in touch with you.

"I have an offer. Can we talk? Let me know when it's convenient to talk.

"YB, Sabah is about to change hands, don't miss this golden opportunity, take my offer. Meet me in KL," Azis said when reading out the alleged WhatsApp message to Isnaraissah.

Azis, who was former deputy home minister, also claimed that he was informed that even some police personnel had been roped in to coax certain leaders in Sabah to switch allegiance.

"I hope this is not true.

"That is why I hope the Home Minister will investigate the matter.

"This is a form of harassment and corruption," he added.

Mohamad said that Azis "should be careful" with his allegations as they were neither unfounded nor proven.

Azalina requested Azis to move on and debate on other issues.

However, Mohamad kept on interrupting Azis and insisted on being given the floor to speak, although the latter refused.

An irked Azalina stepped in to restore order in the House and ordered Mohamad to sit down.

Azalina reminded lawmakers that a parliamentarian enjoys immunity in the House and can raise any allegations during debates.

"It is his (Azis) floor and he is not giving you way.

"If he is making allegations and you are not happy with them, ask him to repeat them outside.

"If they are not true, then you can sue him," Azalina told Mohamad.

She ordered both lawmakers to take their differences outside, with Mohamad challenging Azis to repeat his allegations outside Parliament. 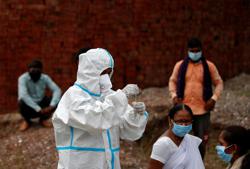