PETALING JAYA: Recently painted murals in Shah Alam featuring the portraits of the country's leaders, including the Health director-general, have been vandalised.

The murals, which had gone viral and attracted the attention of some of the leaders portrayed, were found to have been defaced with red spray paint.

A Twitter user with the handle @MrJamesLabu posted a video depicting the murals of the leaders with their eyes sprayed over, along with derogatory words.

“Who is the person who has such a malicious heart?” the user had said on Monday (July 20), urging for the police and the Shah Alam City Council to take action.

The 14-second video garnered 11,000 retweets on Twitter, with many netizens expressing their anger and outrage.

The same user later posted another picture showing that the murals have now been painted over and completely removed.

The murals had adorned the walls of a building at Taman Cahaya Alam in Section U12. 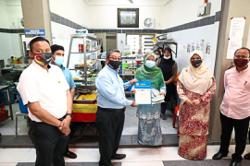