The Communications and Multimedia Minister said the theme reflected Malaysians from different walks of life coming together to overcome the pandemic.

“A special mention goes to the frontliners who have worked tirelessly in the fight against Covid-19,” he said when launching the theme and logo here yesterday.

Saifuddin said the theme also encompassed the government’s initiatives to assist the people during the difficulties, including the Prihatin economic stimulus package.

He said the accompanying logo’s heart shape symbolised a caring government while its red and white stripes, crescent and 14-point star were inspired by the Jalur Gemilang.

“In the run-up to National Day, the National Month and Fly the Jalur Gemilang campaigns will be launched in Putrajaya and state capitals on July 28.

“Due to restrictions, there will be no parade on National Day this year but RTM will broadcast a special programme to celebrate the occasion,” he said.

Saifuddin also announced that Sarawak would host the Malaysia Day celebration on Sept 16 for the second year in a row.

It will be held in Sibu after Kuching hosted last year’s celebration.

Rundi said the celebration would be held in a hotel for invited guests only in order to maintain crowd control and social distancing.

He said the number of guests would depend on the size of the premises.

“We have chosen Kingwood Hotel but this has yet to be finalised. The number of guests could be half or two-thirds of the 2,000 capacity,” he said. 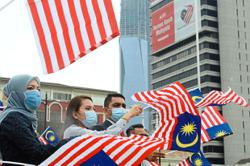