PETALING JAYA: Six men, including a Datuk, are expected to be charged with the kidnapping of a businessman with the title Datuk Seri.

"The Attorney General's Chambers have instructed for the suspects to be prosecuted under Section 3 of the Kidnapping Act 1961, read together with Section 34 of the Penal Code.

"The suspects include the Datuk and a Bangladeshi man," he said when contacted Thursday.

A total of 11 men have been detained in connection with the fatal kidnapping of the Datuk Seri.

On June 30, the victim's body was discovered in the bushes of Jalan Rawang Bestari Jaya at about 9am.

SAC Fadzil had previously said the victim knew one of the suspects - the Datuk - from past meetings.

"We are not ruling out the possibility that business rivalry or past debts and dealings as the motive behind the kidnapping," he had said.

Money woes may be motive behind fatal kidnap 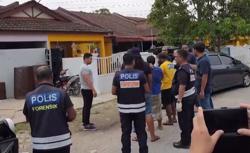