Many welcome digital platform for Census 2020

KUALA LUMPUR: Malaysians have expressed their readiness to take part in the Population and Housing Census 2020 (Census 2020) via the e-Census digital platform at https://ecensus.mycensus.gov.my which will run until Sept 30.

Some of the people met said that the digital platform developed by the Department of Statistics Malaysia (DOSM) is in line with the current Covid-19 pandemic as well as Industrial Revolution 4.0.

Stationery shop manager, Chia Mui Gee, 33, said the digital initiative for Census 2020 is necessary as she considers the health and safety of her family as a serious matter.

“This initiative is appropriate for the new normal, I would opt for it and would be comfortable to give the data online even though I have never done it before.

“I think the platform facilitates the chore for all parties and reduces infection risk,” she said, adding that the government should spread information on Census 2020 and its link via text message.

Tremkumar Krishnan, 43, said he would take the survey online since he works odd hours.

“I work from Monday to Saturday. Sometimes I have to get to my workplace early (in the morning) and return late at night,” he said.

“To me, taking the survey online is most convenient because I can do it anytime within the timeline.”

Tremkumar, who works in the private sector, said the online platform is suitable for urban areas which have widespread Internet access and hoped there would not be problems such as long wait, buffering or inability to access the link.

Besides that, he said census enumerators scheduled to conduct face-to-face interviews with residents should wear uniforms, carry identification and observe social distancing for respondents to feel safe.

This was also to avoid confusion and prevent them from being taken advantage of by scammers or criminals, he said.

A pensioner, Azman Badiuzzaman, 64, said due to his age, he had trouble using smartphones that would make it difficult for him to send information via e-Census.

“I am not skilled at using a smartphone and worried that problems will arise such as the data not recorded even though I have hit the ‘send’ button many times.

“In the old days, enumerators would come to the house, and after the session, they would paste a sticker on the gate,” he said.

Trader Siti Salwana Abu Bakar, 35, said many are still not aware of the importance in taking the Census 2020 survey, which is critical for the government to update population data for the country’s development and that the government should publicise the exercise extensively due to the 10-year gap.

For Agnes Saw, 41, who works as a quantity surveyor, the e-Census platform has made the exercise more convenient and time-saving.

“All these years, I have been living with my parents, so normally DOSM officers will come to conduct data collection from house to house.

“Due to the pandemic, I hope the officers can contact us via telephone call even though they are required to conduct face-to-face interviews in the second phase,” she added.

Census 2020 is the sixth exercise conducted every decade since 1963, and this year, it will cover nine million residences in order to obtain comprehensive census data which include inputs for the monitoring of Sustainable Development Agenda 2030.

According to mycensus.gov.my website, the exercise will be implemented in all housing areas and residences all over Malaysia in two phases, the first, via the online platform e-Census starting from July 7 until Sept 30 while the second phase will be conducted by face-to-face interviews from Oct 7 to 24. — Bernama 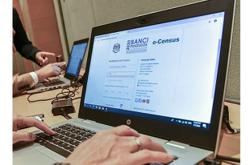 State secretary: 2.6 million Perakians to be involved in Census 2020