KUALA LUMPUR: The government is targeting sales of at least RM513mil for this year's Buy Malaysia Campaign that will take place from July until the end of the year.

The figures only cover major retailers and online marketplaces, and does not include smaller retailers, for example.

"To revitalise and re-energise the economy, we have to focus on local enterprises.

"Their products will be given priority. If we can help our local enterprises, there will be no loss of employment.

That is important for the Malaysian people," he said during the launch of the Buy Malaysia Campaign on online shopping platform Shopee at their headquarters here on Tuesday (July 7).

Alexander also said it was important to strengthen public-private partnerships to accelerate digitisation of Malaysian businesses, especially for small and medium enterprises to ensure the domestic economy did not get left behind in the wake of the Covid-19 pandemic.

He said both sectors played a role in addressing the challenging economic climate by reinforcing the government’s strategies and offering practical solutions that would benefit Malaysian businesses and consumers alike.

"For example, many workers who lost their jobs and struggling enterprises shifted to e-Commerce in order to supplement their income. Similarly, consumers flocked online to purchase daily necessities without putting themselves and their families at risk.

"Further, the lower cost of daily necessities on e-commerce platforms like Shopee, due to the lack of middlemen and low overhead costs, also contributed to easing the otherwise heavy expenses," he said.

Tan Ming Kit, Shopee head of fast moving consumer goods, said the platform would put the spotlight on Malaysia-made products, as well as local businesses, through a new portal on their application.

He said when they first ran their campaign last year, they only had 2,300 Made-in-Malaysia products on their microsite. Today it has over 11,500 products. 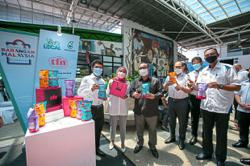