GEORGE TOWN: The statue of Captain Francis Light, founder of George Town, has been defaced with red paint splashed on it.

“We received a report on the statue being vandalised and defaced with red paint. Police are investigating the case, which has been classified under Section 427 of the Penal Code for committing mischief,” he said.

The statue was erected 84 years ago to commemorate Light’s contribution to the founding of George Town.

Checks by The Star showed that the statue had been cleaned, but some paint marks were still visible.

The statue is a historical landmark in Penang and is located within the grounds of the famous Fort Cornwallis.

It was sculpted by FJ Wilcoxson and cast at Burton’s Foundry in Thames Ditton, England. It was erected to celebrate the 150th anniversary of George Town.

The bronze statue used to have a sword, which has been missing since World War II.

It is believed that the sword was taken by the Japanese, who removed the statue during their occupation of Penang in 1942. 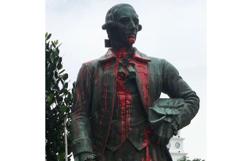 Perhilitan on hunt for man who sprayed paint on monkey Our colonial history and us