KOTA BELUD: Kota Belud, the “rice bowl” of Sabah, is looking at RM29mil in losses after nearly 7,000ha of padi fields were severely damaged by floods that hit the district following heavy rainfall.

Kota Belud Integrated Agricultural Development Area director Salmah Labulla said that the estimated losses were calculated based on the potential yield, current market price and the costs involved in cultivation.

“Based on aerial view, we found the entire area of ​​about 7,000ha of padi fields have been affected by the floods with losses estimated at RM29mil, ” she said.

Salmah said that almost half the padi fields in Kota Belud, which were about to be harvested, were covered in mud.

She said that the 3,000 affected farmers would be given assistance of between RM800 and RM1,000 per hectare each, based on the age of their crops through the disaster relief programme.

In the meantime, several measures must be implemented to prevent such problems from recurring, Salmah said.

They include looking at the need for a dam to control water levels and deepening the rivers in Kota Belud.

Farmers expressed their sadness at seeing the damage to their crop, which was mere days away from being harvested.

Perin Rahil said that 2ha of his padi fields were damaged and his losses were estimated at about RM11,000.

For Amran Sibin, assistance from the government was very much needed to ease his burden.

Another farmer, Makdin Umpong, who was set to harvest his crop this week, was saddened by the calamity but he accepted it as something that couldn’t have been predicted. — Bernama 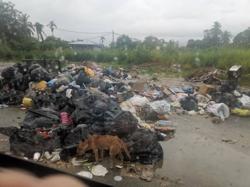