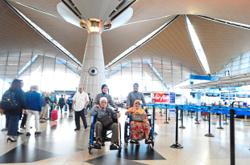 The Transport Minister said the new OA will be a vital guide for the development of the nation's aviation gateways to keep them modern, world-class, competitive and sustainable while catering to future trends.

“This OA will help Malaysia Airports Holdings Bhd (MAHB) in strengthening our airports into important hubs for air travel and logistics in Malaysia.

“To do that, the OA must be investor-friendly, create value for users and provide clarity to all stakeholders and investors,” he said in a Facebook post on Sunday (June 14).

The Ayer Hitam MP had earlier delivered his closing remarks to key stakeholders and participants at an OA workshop by MAHB to finalise the OA’s articles and clauses.

He said the articles and clauses will form the basis of the government’s relationship with MAHB until Feb 11, 2069.

“The outcomes from the workshop will be refined and finalised in due time,” he said, adding that he was hopeful for the new OA to be inked this year with MAHB.

Dr Wee noted that collaboration between MAHB and the government was crucial to develop the nation’s 39 airports, including five international airports, 16 domestic airports and 18 STOLports (short take-off and landing airports), serving more than 120 airlines and nearly 100 million passengers yearly.

“After the new OA is signed, the operation and management of airports in Malaysia should be sustainable long-term while providing flexibility to MAHB to undertake necessary development projects or initiatives to improve airport infrastructure and services while providing the government with better revenue.

“For sure, there is an imminent need for our airports to be upgraded in the near future to support economic growth, attract international travellers as well as pull in investments and create jobs,” he said.

Dr Wee also thanked MAHB for hosting the three-day workshop over the weekend.