PETALING JAYA: The initiatives announced in the Short-Term Economic Recovery Plan is a welcome relief for employees whose jobs were badly affected during the movement control order (MCO) period, say employers.

“The amount could help cover about 10% of the total wage bill for the private sector for three months.

“This is an important aspect that the government should look at if it wanted to make it more attractive for employers to avoid retrenchments, ” he told The Star.

Prime Minister Tan Sri Muhyiddin Yassin announced yesterday that nearly RM9bil would be allocated to address rising unemployment through various initiatives for the benefit of over three million workers.From that, RM5bil is for the extension of the ongoing Wage Subsidy Programme, which allocates RM600 per worker (up to 200 workers per firm) for three months.

Employers who are not allowed to operate during the conditional MCO are allowed to apply for the wage subsidy programme.

Then there’s the employment subsidy programme worth RM1.5bil that allows companies to get subsidies for providing jobs, a move expected to benefit 300,000 people.

Shamsuddin lauded the initiatives and said it would encourage employers to offers jobs, rather than thinking of downsizing.

“When you talk about retrenchment, it’s usually using the ‘last in, first out’ principle, so it would have affected youth the most, ” he added.

Shamsuddin also said the RM2bil allocated for training incentives would encourage employers to engage the unemployed and youth, and provide them with the necessary skills and knowledge, especially those in line with the Industrial Revolution 4.0.However, Shamsuddin said the government should also review the allocation for wage subsidies later on as employers might still be struggling in future.

“The government should consider a longer period as the lingering negative impact of Covid-19 may extend to next year.

“The government should (then) also consider allocating more funds for the wage subsidy programme, ” he added.

“The RM5bil for Wage Subsidy Programme will help safeguard some 2.5 million jobs.

“For workers in the tourism sector and other sectors not allowed to operate during the MCO, and those told to take unpaid leave, their employers can also apply for the subsidy with the condition that workers will get the payment.

“Also, the RM1.5bil employment subsidy programme is newly-created, encouraging firms to hire unemployed workers from all age groups, ” he said.

SME Association of Malaysia president Datuk Michael Kang also lauded the government’s initiative to help and encourage the unemployed to improve their skillset.

“Unemployed workers can claim training allowances of up to RM4,000 from Socso even though they are not contributors under the Employment Insurance Scheme.

“Employers who provide apprenticeships to school leavers and graduates can get incentives at a rate of RM600 per month.

“All these are good because when companies restructure, they will have to reskill and upskill their workers. This is useful in helping firms to transform, ” he added.

“It has 40 initiatives worth RM35bil to will save jobs, besides reducing the cash flow burden on the people and companies.

“Companies get subsidies for giving jobs, and the incentives will support the companies for at least six months, ” he said. 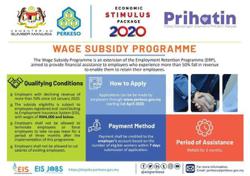