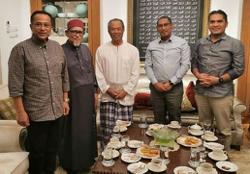 The special message by the Prime Minister was broadcast live at 3pm Friday (June 5) by local television stations and social media networks.

According to Tengku Zafrul, the Short-Term Economic Recovery Plan is the fourth of the six-phase 6R approach (Resolve, Resilience, Restart, Recovery, Revitalise and Reform) in weathering the health and economic challenges due to the Covid-19 pandemic.

Below are the highlights of the Prime Minister's speech:

> Up to June 2, the Statistics Department recorded that around 12.7 million or 83.5% of the workforce has started working as compared to only 10.2 million on May 17.

> Nearly RM9bil allocated by government to address rising unemployment, it will benefit over 3 million workers nationwide.

> Wage Subsidy Programme which allocates RM600 per worker to be extended for another three months.

> Employers who are not allowed to operate during the conditional movement control order (MCO), are allowed to apply for the wage subsidy programme.

> The government has come up with “Penjana” (Pelan Jana Semula Ekonomi Negara to empower people, propel businesses and stimulate the economy. It has 40 initiatives worth RM35bil, of which RM10bil is a direct fiscal injection by the government.

> The packages to stimulate the economy carried out by the government have saved more than 2.4 million jobs, reduced the cash flow burden of around 10 million people, and supported more than 300,000 companies.

> An employment subsidy programme worth RM1.5bil. Companies will get financial subsidies for giving jobs to the unemployed. An expected 300,000 people will benefit.

> There are two incentives given to companies, whereby those that employ unemployed Malaysians under 40 will get RM800 per worker and firms that employ those 40 years and above or persons with disabilities (OKU) will get RM1,000. The incentives will be given for six months.

> Government to introduce My30 unlimited pass for public transport users. Commuters can now pay RM30 a month for unlimited rides. It is open to all nationalities, beginning June 15 until the end of 2020.

> Grants will be given to daycare (taska) operators for implementing and adhering to the SOPs (standard operating procedures) set by the government.

> E-vouchers will be available for those who order child-minders’ services online.

> Up to a RM3,000 incentive of individual income tax for fees paid by parents to taska and tadika (kindergartens).

> Banking sector allocates RM2bil to assists SMEs, where applications begin mid-June, with a threshold of RM500,000 per SME.

> Cash-flow aid by SME Bank for G2 and G3 contractors that have been awarded minor government projects.

> Penjana Nasional fund worth RM600mil to drive the process of digitalisation of businesses and innovation. A matching fund will be matched by local and international investors.

> To encourage Malaysians to use contactless payments, the government has allocated RM75mil to e-wallets, or RM50 per person, where Malaysians can begin applying in July 2020. It is set to benefit 15 million Malaysians.

> 100% tax exemption for the purchase of locally assembled cars beginning June until Dec 31.

> RM1bil for the tourism industry to help related SMEs to operate in the ‘new normal’.

> Exemption of services tax on lodgings and accommodation services extended from Sept 1,2020 until June 30, 2021.

> Lessen companies' financial burden through the waiver of penalty to companies that are late in submitting payment for SST as well as extension of various tax exemptions.